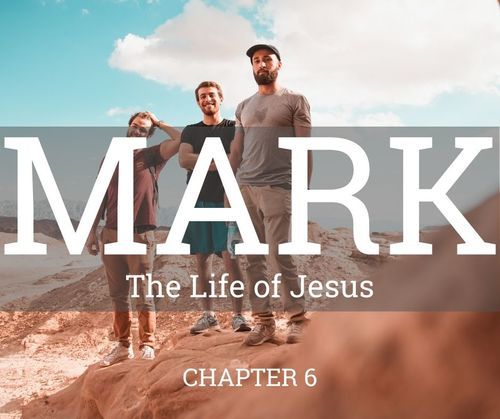 Thank you for joining us in listening to Mark 6! If you haven't listened to it yet, you can do so here. Access a written copy of Mark 6 in the NLT here.

1. When Jesus returned to His hometown, Nazareth, the people who had known Him for years were offended by Him and refused to believe Him. The text says that Jesus was "amazed by their unbelief."
-If Jesus came to your town or your ship, what do you think He would be amazed by (good and bad)?

-What is it like to be a Christian in your hometown?

-What does it look like to believe Jesus?
2. Jesus sent the 12 disciples out to preach and heal. The only thing they were told to bring with them was a walking stick— no food, no bag, no money, no change of clothes. What an act of faith! They were asked to leave behind the supplies they would normally use to take care of themselves. Perhaps Jesus asked them to do this because He wanted them to rely on God to take care of them. Perhaps He wanted them to know that the "success" or "failure" of their mission would not rely on their physical preparation, but HIS power and provision.
- What does it look like to trust God with our possessions?

- When are you tempted to rely more on yourself than on God?

-Why do or don't you believe He is more than a prophet?
4. Twice in this passage, Jesus pursues rest. The first time, a huge crowd (of over 5,000 people) interrupts His plan. He has compassion on them and teaches them...and then miraculously feeds them. However, after He feeds them, He says goodbye and goes to the hills alone to pray.
Jesus sacrificially loved people AND took initiative in pursuing rest. I bet that a few of those 5,000 people He fed wanted to be with Him after meal time was over, but He said goodbye, sent His disciples across a lake, and went to be alone with God.
- How can you/do you purposefully rest with God?

- What keeps you from resting with God?

-What difference does resting with God make in your life?

-What is your attitude when your plans are interrupted?
5. Jesus and His disciples fed well over 5,000 people with five loaves of bread and two fish. Initially, the disciples assumed that whatever resources were available to them would not be enough. However, the little they could find became more than enough in Jesus' hands.
- Do you ever feel like you don't have enough? What resources do you have? Write them down! How might God be asking you to use your resources and trust Him with the outcome?

-Is there something God is asking you to do that seems impossible with what you have? What would it look like to step forward in faith?

-Tell about a time God did more than you thought was possible!
Posted in App
Tagged with Mark, Scripture, Discussion, App, Bible