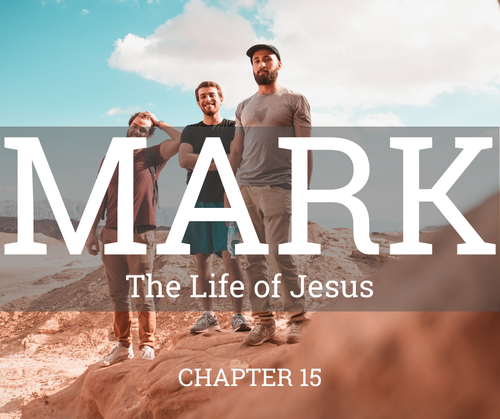 Thank you for joining us in listening to Mark 15! If you haven't listened to it yet, you can do so here. Access a written copy of Mark 15 in the NLT here.

Pilate asked the crowd what should be done to Jesus—they said to crucify Him. When Pilate asked what crime Jesus had committed, they didn't answer him. They just kept yelling, "Crucify." So Pilate released Barabbas and ordered that Jesus be flogged, then crucified.
- We see in this chapter that Pilate knew the religious leaders arrested Jesus because they were jealous. What do you think is the source of that kind of envy? How have you seen envy be destructive in your life or in the world?

- Pilate never declared Jesus guilty and he knew the religious leaders' motives were bad, yet he still handed Jesus over to be tortured and crucified. Why do you think Pilate acted the way he did? How do you see injustice in your community? When are you tempted to not do what is right?
2. The Roman soldiers not only flogged Jesus, but mocked Him, beat Him with a stick, and spit on Him. Then the soldiers forced a man named Simon to carry Jesus' cross to Golgotha. When they arrived, the soldiers nailed Jesus to the cross. They divided His clothes and gambled for them. Two criminals were crucified on Jesus' right and left. The people and religious leaders continued to falsely accuse Him and mock Him.

-The suffering Jesus went through for us was more than emotional and physical—it was spiritual. Sin separates us from God, but Jesus endured that separation from God the Father so we don't have to. This complete payment for our sins made a way for us to be in God's presence. The curtain at the temple was torn in two. This was a physical representation of this spiritual reality: ALL people who accept Jesus' payment for their sins can now be in God's presence—not only priests and Jewish men, but ALL people. Have you accepted Jesus' payment for your sins? If so, tell us about it!

- Through Jesus' payment we have access to God! We can pray directly to Him! As we've learned, this privilege was bought at a high, high price. How might God be inviting you to spend time with Him? How does meditating on this passage change the way you value your time with God? You are so dearly loved!
3. When a Roman officer standing in front of Jesus saw how He died, he said, "This man truly was the Son of God!" Some women were there watching. They were followers of Jesus and had cared for Him in Galilee. Many other woman who had come with Him to Jerusalem were also there. This all happened on a Friday, the day before the Sabbath. A man name Joseph of Arimathea who was an honored religious leader took a risk and asked Pilate for permission to care for Jesus' body. Pilate had a soldier confirm that Jesus was dead and gave Joseph permission. Joseph took the body, wrapped it in cloth, and laid it in the tomb.
- What do you think of the Roman officer's response to Jesus' death? What is your response to Jesus' death?

-Mark, the writer of this gospel, is behaving in a counter-cultural way when he writes about the women who were at the cross and describes them as followers of Jesus. Their care for Jesus is described using the same word Mark used in Chapter 1 to describe the angels caring for Jesus in the wilderness. It is also used by Jesus Himself when he describes "the mission of the Son of Man (10:45)—diakoneō ("to serve)" (The IVP New Testament Commentary: Mark, 336).  At the cross, the women were serving Jesus us by being with Him in His suffering. How does this challenge or encourage you? What does this passage show you about the way God values women? What do you learn from this passage about what it means to serve?

- Joseph of Arimathea takes a risk and serves Jesus as well in this passage. He is described as "an honored member of the high council" and as a person who was "waiting for the Kingdom of God to come" (verse 43). Most of the religious leaders were so opposed to Jesus that they wanted Him dead! Joseph's risky actions show that he cared more about the Kingdom of God than his standing in the Jewish community. What matters most to you? What does it look like to be a person who is "waiting for the Kingdom of God"? Tell about a time God asked you to take a risk for Him. How might God be asking you to serve Him today?
Posted in App
Tagged with Mark, Discussion, Scripture, Devotional