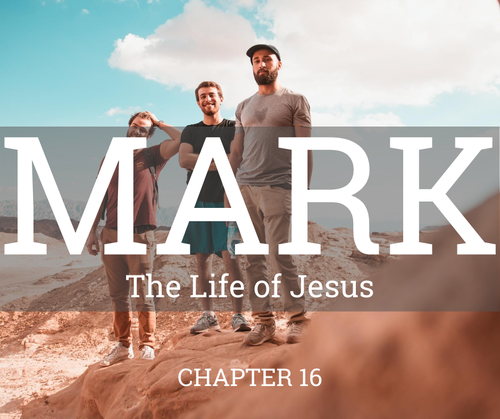 Thank you for joining us in listening to Mark 16! If you haven't listened to it yet, you can do so here. Access a written copy of Mark 16 in the NLT here.

1. After the Sabbath (Saturday), the two Mary's and Salome went to Jesus' tomb to anoint His body with spices. These three women saw Jesus die on Friday and even saw where His body was laid. They expected Jesus' dead body to be inside the tomb, even though Jesus had prophesied that he would die and rise again three days later. Imagine being one of the women and seeing everything that happened to Jesus. It must have been horrible.
-What do you think was going on in the women's heads, hearts, and bodies as they walked to the tomb? Why do you think the women expected Jesus to be dead?

-What expectations (if any) do you have of Jesus? Tell about a time when your circumstances made it difficult to believe Jesus' promises. Tell about a time when you believed or felt like God was dead.
2. The women expected the stone to be in front of the tomb. Instead, it was rolled away. To their surprise, they did not find a dead body, but an angel dressed in white! He said, “Don’t be alarmed. You are looking for Jesus of Nazareth, who was crucified. He isn’t here! He is risen from the dead! Look, this is where they laid his body. Now go and tell his disciples, including Peter, that Jesus is going ahead of you to Galilee. You will see him there, just as he told you before he died" (verses 6-7).
-Do you believe Jesus rose from the dead? Why or why not?

-Who first told you about Jesus' resurrection? What was that like?

-The angel told the women to look at the place where Jesus' body was laid. What has God asked you to "look at" to more fully understand that He really is alive?
3. This situation not only contrast the women's expectations, but the world's! At that time, the testimony of women didn't "count." If Mark was making up this story, it would have been a bad move for him to write that women were first people entrusted with the good news of Jesus' resurrection! But the story IS true. God values people differently than the world values people. These three women are the first hearers of the gospel and the first who are told to share the gospel.

At first, they were scared and confused, but then they did end up sharing the good news!
-What was your first response to the news that Jesus rose from the dead? Why do you think you responded the way you did?

-What do you learn about God in this passage?

-How has God used you in unexpected ways?

-Who might God want you to share the good news with?
4. Whew...what a journey through Jesus' life this has been! Thank you for joining us. Take a moment to think about the time you've spent studying this book.
-How has God worked in your life and heart as you've learned about Jesus' life?

-What is still confusing to you about Jesus or the gospel of Mark?

-Would you like to talk to someone about the book of Mark? If so, don't hesitate to reach out to us through Chat with a Chaplain on the M2S app or send us a  message here! You could also consider inviting a Christian friend (or friend who is curious about the Bible or God) to go through this study with you.
Posted in App
Tagged with Mark, Discussion, Conversation, Devotional, Scripture