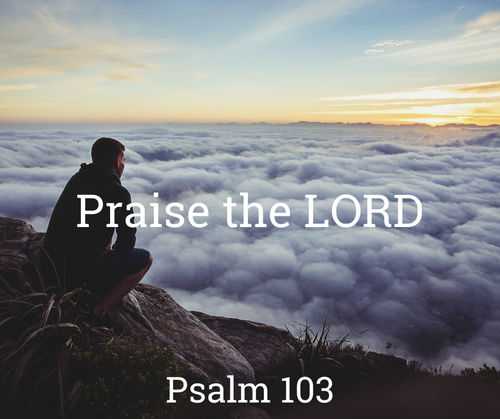 Hi friends! Thank you so much for joining us here.

We hope these journal starters spark reflection on the Psalms.

If you want to, you can share some of your thoughts in the comments section below. We would love to hear how God is working in your heart.

You can listen to or watch Psalm 103 here. You can find Psalm 103 in the New International Version here.

David told his soul to praise the LORD and then, right after that, to not forget what the LORD had done for him. Remembering what God has done for us is one way we can stir (inspire, awaken) our souls to praise God. David remembered that God is the One who:He also said that God crowned his soul with "love and compassion" and "satisfied his desires with good things."
-Take some time to remember what God has done and is doing for you. Write down your words of praise or copy David's.

-How has God satisfied you?

-What thoughts, feelings, or desires do David's personal words of praise bring to you?
Though this hymn of praise starts out with personal language, it widens to include all of God's people. David wrote about how God showed Moses and the people of Israel how compassionate and gracious He is.

Like most of us, the people of Israel regularly forgot what God had done for them. They forgot how God had rescued them from slavery in Egypt and provided for them in the wilderness over and over again. They would move away from God and sometimes there were consequences for their actions—like there were for David when he killed Uriah— but God did not treat them as their sins deserved. He was gracious brought them back to Himself time after time.
David wrote in verse 8:
The Lord is compassionate and gracious,
slow to anger, abounding in love.

David did not come up with these words himself. The Lord spoke these words about Himself to Moses in Exodus 34:6-7:
The Lord, the Lord, the compassionate and gracious God, slow to anger, abounding in love and faithfulness,  maintaining love to thousands, and forgiving wickedness, rebellion and sin.

The word "compassionate" here means to be "merciful, favorable, i.e., pertaining to showing favor, and not punishment as is often deserved, implying a forgiving relationship" (A Dictionary of Biblical Languages w/ Semantic Domains: Hebrew (OT), James A. Swanson).

This use of the word "gracious" is a special one; "it is applied only to God" (Lexham Theological Wordbook, multiple authors). Grace is undeserved favor. God shows undeserved favor in a way no human can!
-What do you think of this description God gives of Himself? How does this conflict with or confirm your beliefs about what God is like?

-What makes God gracious in a way that no human can be?

-How would you describe God? If it's helpful, make two lists—one for what you know in your head about God based on what the Bible says and another list for what you feel God is like and how you picture Him in this moment. Ask God to help you see how you came to believe any ideas about God that you know don't reflect who He really is. Ask Him to meet you in them and help your heart to see who He is.
David wrote that God's love for those who fear Him is as great as the heavens are above the earth and that He has removed their sin from them as far as the east in from the west! He went on to say that God's compassion is like that of a father who knows his children deeply. Derek Kidner wrote about these verses in the Tyndale Commentary:
"If immeasurable distances are one way of expressing immeasurable love and mercy (cf. Eph. 3:18f.; Isa. 55:6–9), the intimacy of a family is another. By the first, we are led out into ‘a large place’, to walk at liberty; by the second we are brought home."
-If you have been set free through Jesus, this great love and liberty from sin are yours! How have you experienced the freedom and love God gives?

-Why do you think it is sometimes hard to feel the freedom God gives us from our sins?

-What do you think of the idea of being "brought home" by God?

-Close your eyes and imagine feeling completely at home—accepted, safe, comforted, enjoyed, loved. Now imagine God there—what happens? If you don't feel at home with God, perhaps ask Him why.
A beautiful contrast is presented for us in verses 13 to 19. David painted a picture of how we are mortal. We die, like the flowers of field. Our lives are fragile. But, there is good news, and it is found in the character of God.

We don't last, but God's love for those who fear Him is everlasting. Our little kingdoms will come to an end, but His throne will not be moved and "his kingdom rules over all." When those who are God's children die, they live on with God in His everlasting love and everlasting kingdom!
-How does this passage comfort or concern you?
The final verses of this psalm are a call for every being and every thing to praise God everywhere! David ended this hymn of worship the way he started it: "Praise the LORD, my soul."
-How does your heart respond when you hear/read these verses?

-What is your worship like when you are alone versus when you are with people? What kind of worship does your heart long for? Do you miss worshiping God with other people when you are on ship?

-If you want to, read this psalm out loud as your own hymn of praise to God. You could also invite a friend to read it with you and worship God together.
Posted in App
Tagged with Journal Starter, Conversation, Psalm, Psalms, Discussion, Bible, Scripture